The year 2009 was truly a trying year for both the department and the City of Dickinson. However, after each event, the community pulled together and proved this is one of the greatest parts of the nation to live and work. On the evening of July 8th, 2009, Dickinson’s southside was struck by an EF3 tornado. The destruction left behind was immense, but by some miracle, no one was killed or seriously injured. Citizens picked themselves up, dusted themselves off, and helped each other rebuild. 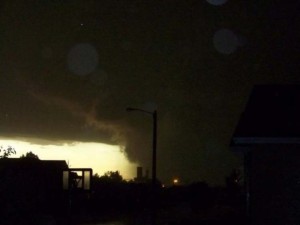 Around 8:10 PM, the Dickinson Regional Communication Center began receiving calls of a possible funnel cloud just west of the city. The outdoor warning sirens had been activated several minutes prior to this, as the National Weather Service (NWS) was detecting rotation in the cell headed for town. As the minutes passed, the types of calls being received in the dispatch center became more serious. At 8:14 PM, dispatch received a 911 call stating a roof had been blown off an apartment complex by a tornado on the southwest side of town. Patrol units, who had been monitoring the storm’s progress from areas within the city, were immediately dispatched to the area. The dashcam video from one of the units is embedded below.

In the days leading up to the evening of July 8th, the National Weather Service conducted a conference call with Stark County Emergency Manager. The NWS meteorologists explained they were forecasting a potential outbreak of several weather with a high likelihood of tornado formations over the southwest portion of North Dakota. According to the emergency manager, this was the first such conference call the NWS had with Stark County in recent memory. Basically, they knew something was coming. The weather conditions were perfect. Their forecasting seemed solid. Local weather stations painted this picture days in advance as well. This may credit the fact that no lives were lost.

As officers approached the area from the north side of town, debris-size started from small branches and became larger- to limbs, to entire trees, building materials, and powerlines. Large hail pelted the cars. As they reached the area just south of the Heart River bridge, it became clear that Dickinson had been struck by a tornado. A few moments later, the “rear flank downdraft” of the storm passed over the patrol units, causing the visibility to clear and the extent of the devastation to truly be known. An “all call” for police, fire, and ambulance was initiated; something rarely, if ever, having to be done in the city of Dickinson. Crews went from door-to-door assessing the damage and checking for injuries. Utility companies arrived quickly to ensure all services were either safe or shut off. Amazingly, there were no fatalities and only a handfull of minor injuries- mainly from debris related cleanup after the tornado had passed. As dawn broke the following morning, residents began cleaning up. The National Guard provided security for the southside of town for several days. At a later estimate, the tornado damaged at least 450 homes, with half of those being completely destroyed. The damage total was estimated to be in excess of $20 million dollars. Upon doing a damage assessment, the National Weather Service rated the tornado as an EF3 with winds in excess of 150 MPH. 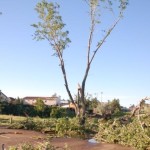 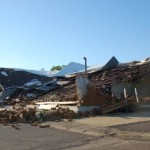 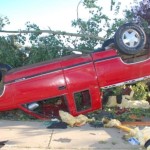 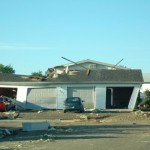 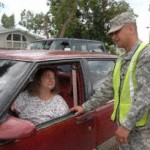 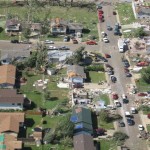 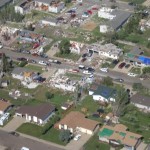 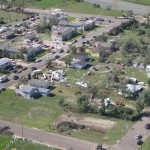 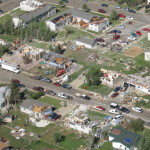 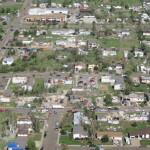 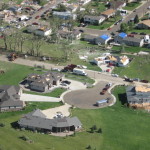 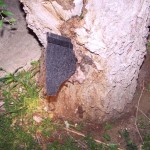 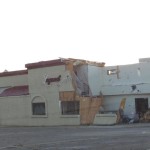 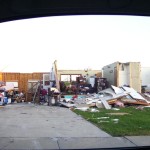 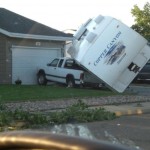